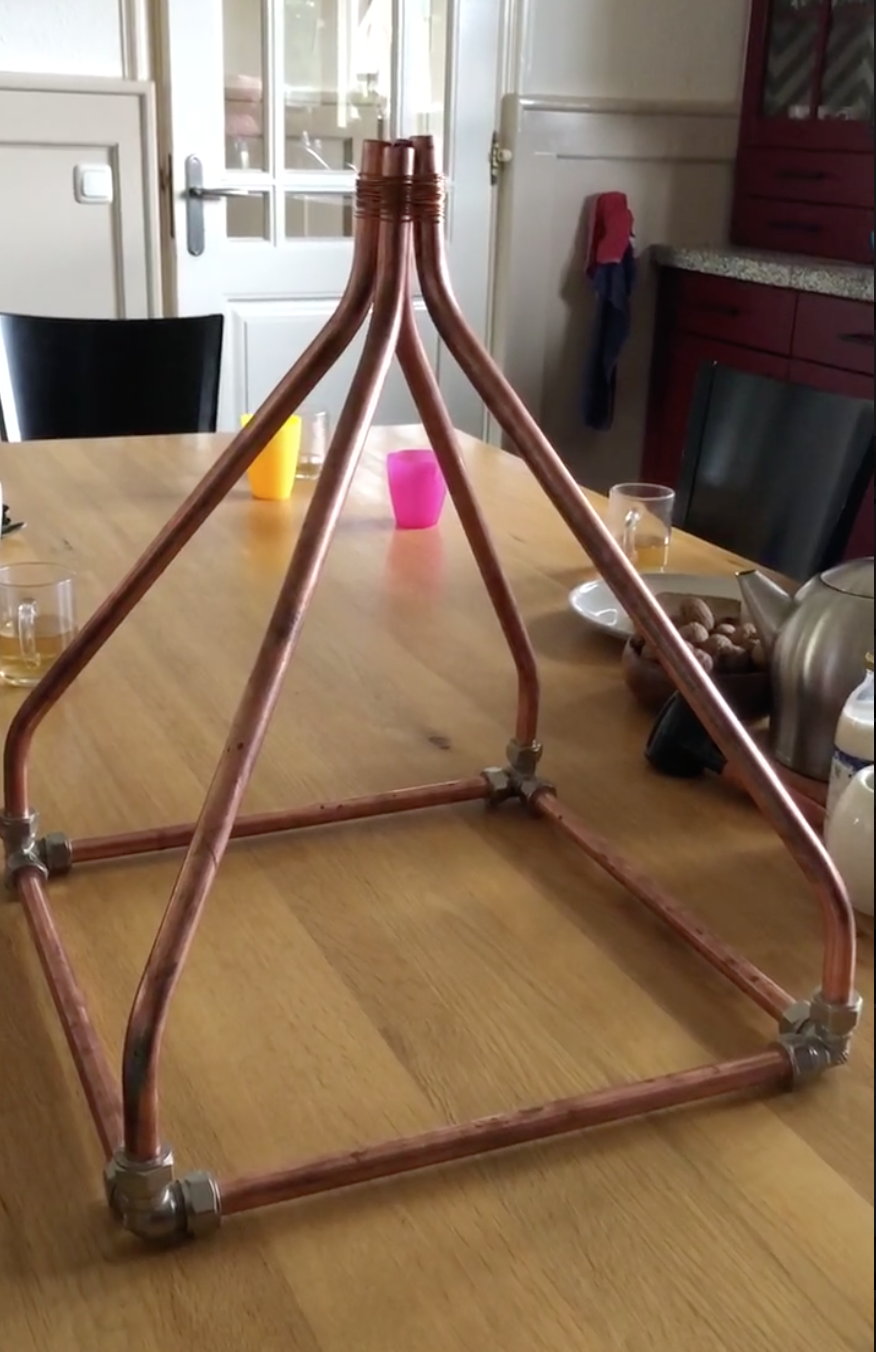 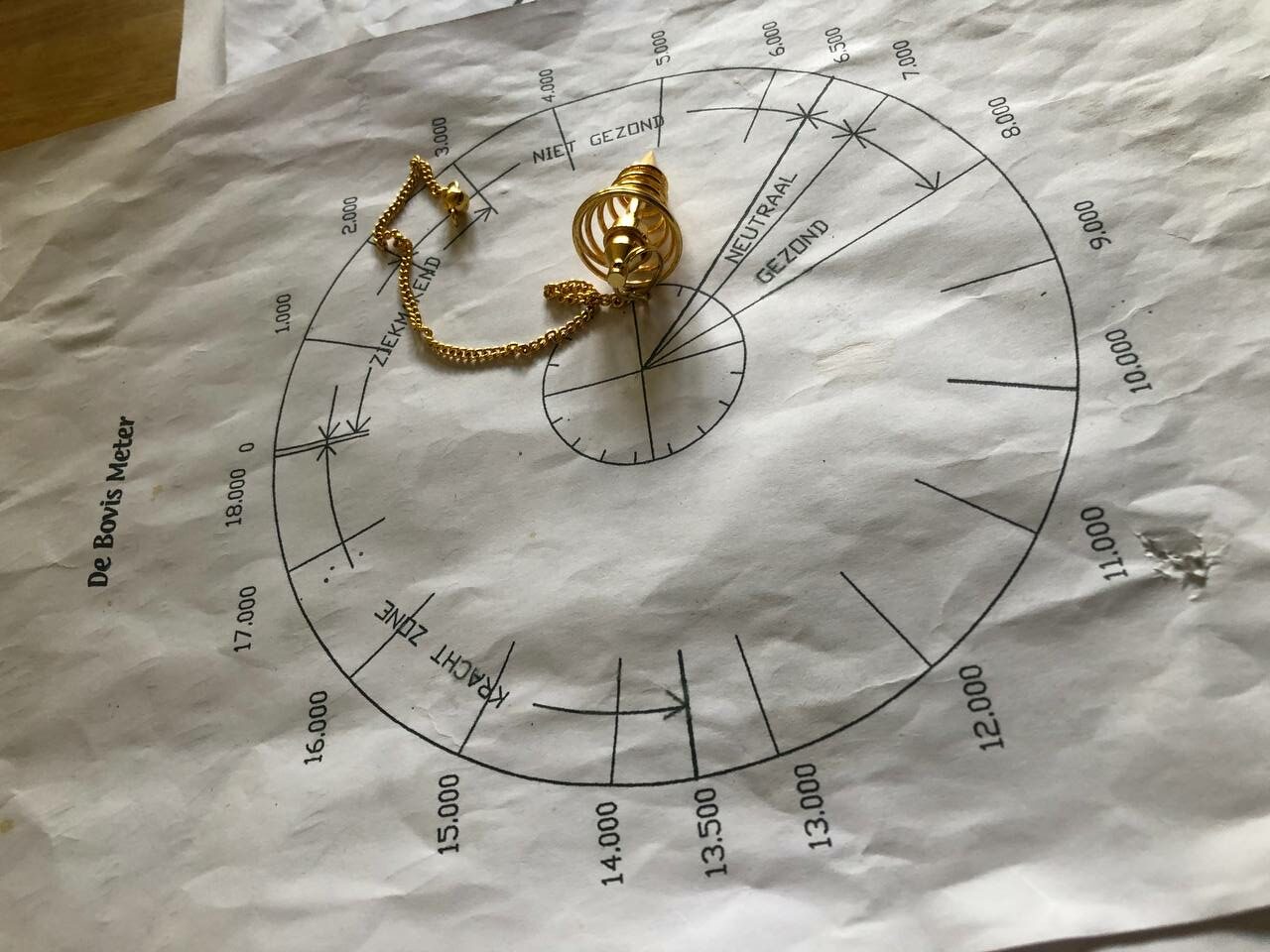 Saturday, May 22, we had a visit from a number of people from the Free Spirits Community to view our pyramids. It was a very successful, fun and special afternoon. It came up spontaneously and so was the afternoon. We pinned foods and our own Bovis value the pyramids felt and experienced. And of course shared other beautiful topics. Very nice to sit at the table with like-minded people. We look back on it with a beautiful and warm feeling. And it was certainly worth repeating.

The French scientist André Bovis has done research into measuring the vitality of food and nutrition. This led to the development of the Bovis scale. The value is expressed in Bovis units (BE). André Bovis assumed that all matter emits radiation and that you can measure the vibration/frequency of this radiation. He made a scale and by moving a pendulum over this scale, he could read the value of the measured product. After the second world war this method was further elaborated by physicist Simonéton and from that time on the result of the scale is called ‘Bovis value’.

Healthy people have a Bovis value of 6500 to 8000 BE. Foods below 6500 BE cost us energy and are pathogenic. These foods keep your vibration low and it takes a lot of energy to digest them.

Therefore, in order to become and remain healthy and vital, we should only eat foods above 6500 BE. Many foods do not reach this value, we have measured with the pendulum. And especially the processed products from the supermarket. By processed, we also mean cooked. Of course you do not have to eat everything raw, but you can make very nice salads from raw fruits and vegetables. Then you can eat boiled potatoes or boiled rice for example. Or you can load the potatoes or vegetables under the pyramid a few hours before you start cooking. Also a snack, a piece of cake or a bag of chips is no problem for your health.

How Do You Measure With A Pendulum?

You hold the pendulum with one hand between thumb and forefinger and keep the pendulum on a paper with the Bovis scale. The other hand you hold about 10 cm above the product. You give the pendulum the command to indicate the Bovis value and concentrate on this. Then the pendulum goes automatically to the right value. If several people measure the same product, it is important to keep the same distance with your hand to the product. Otherwise there will be a difference in results, we have noticed. On the internet you can find free Bovis scales and also blank forms on which you can write down values yourself.

We started measuring water: tap water, well water and rain water. We found out that tap water in the Netherlands has a Bovis value of 1500- 3000 BE. This means that tap water is pathogenic. Rainwater has a value of 11,000 BE and our own source (spring water) 10,000 BE. Then we started to measure various kinds of food and foodstuffs on the Bovis scale. Our conclusions are startling. Most processed foods in the supermarket are pathogenic. So were fresh whole milk (2000 BE) from an A brand and soy drink (3000 BE) from the store. The fresh whole milk from the store dropped rapidly in BE, after 3 days 1500 BE and after 7 days (there was a 7 days fresh guarantee on the pack) the BE was still at 500.

A Message From The Universe

Gerard received an inspiration from the universe to make pyramids of copper to improve the vitality of our food. We did this and placed our food, water (filtered with a water filter) and fruit under them. The Bovis value went up by leaps and bounds. Also, organic foods (fruits, vegetables and peanut butter for example) have a higher BE than the same conventional/ordinary foods. This also means that chemical (pesticide) products or processing have an influence on vitality. If you eat and drink food with a high Bovis value, your vibration will go up. This makes you less susceptible to diseases and ailments.

Our own Bovis value was 6500 BE and has now risen to > 45,000 BE, just by putting our food under the pyramid and eating more purely. And it is still going up. Because your vibration is going up, your body is going to adjust accordingly. This takes time. What this means for us is that sometimes we feel lightheaded, tingling in our arms and legs. A natural high feeling. But everyone probably experiences this differently.

However, only measuring the Bovis value is not enough. The vitality of a product says nothing about its quality. Is the food (and water) also polluted with, for example, chemicals, antibiotics, e-numbers or metals? Gerard himself has created a scale for this: the storage of negative information. We found out that a product can have a good Bovis value, but can be heavily polluted. The best food is food that is pure and unprocessed, directly from the source. This does not include almost everything from the supermarket.

We also wrapped the water pipes with copper wire to increase the vibration/frequency of the tap and spring water, both in the house and in the stables. Raw milk from the cows has increased to 300,000 BE, negative storage 0. Water from the cows is now at 400,000 BE, negative storage 0. The cows are healthier and more vital and take in 10% less feed.
With the thunderstorm the other day, rainwater went over > 1,000,000 BE.

We also made three large wooden pyramids for the garden and yard. The wooden pyramids have a powerful effect. When we stand under them, we feel the high vibration. And you can raise your own vibration and heal yourself. You can also use the pyramids to raise the vibration of your surroundings or for your crops in the vegetable garden. The people who went on Saturday felt light-headed, goose bumps, pressure on the head and shoulders. But it did feel nice. Of course, we also measured the Bovis value of the pyramids, which is > 7,500,000 BE.

You can also make the copper pyramids yourself. It is important that the corners are 45 degrees. You can attach the corners by using compression fittings or soldering. The top of the pyramid is wrapped with copper wire to enhance the effect of the pyramid. If someone would like to have a copper pyramid for their home, but doesn’t have the ability to make it themselves, we can make it for you. However, it is handicraft and we make them in between jobs, so they might not be as smooth and there will be a delivery time.

You can also make a pyramid out of wood. It is important that the wood is untreated. Otherwise the effect is less powerful. For the wooden pyramids, the number of degrees does not matter and you do not need to wrap the top. Should you want to make a cloudbuster on your wooden pyramid, it is important to ground the copper.

If anyone has any questions or comments, we would love to hear them. Also, people are welcome to visit us to experience and feel the pyramids.